What is White Collar Boxing?

White Collar Boxing brings the advantages of boxing training and the challenge of fighting to all. It doesn’t count if you came to know about boxing during the later years of your life.

White Collar Boxing is a type of boxing that considers both male and female in white collar jobs. This form of boxing allows white collar workers to train and fight at unique events before their friend, family and roaring crowd. In this event, many of the participants have no previous experience but have just the courage to hop into the ring and compete. 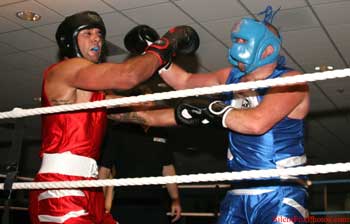 The story of White Collar Boxing dates back to 1988 when two Wall Street workers who were good somewhat in fighting agreed to have a bet on their fighting ability. The decided that the winner will be who would still be standing after three rounds of fighting at a local boxing gym. Apparently, no one would cheerfully want to lose, so each of the workers sought means of improving their fighting skills. They went for trainers and had their unique training schedule.

After six months, it was time to compete; they had it set at Gleasons Gym in New York City – one of the most famous and oldest boxing gyms. They fought before their friend, family, and a huge crowd, and none was declared a winner as both of them left unscathed, they ate together and resumed work the following day.

The story about the event went viral, and many white collar workers hungered to box, and that gave birth to White Collar Boxing. Till date, White Collar Boxing has remained a high adrenalin contact sport controlled and registered by IWCBA – International White Collar Boxing Association. White Collar Boxing promotes the positive features of boxing including confidence, courage, and commitment, as such; it brings many men and women from white and other color collar professions.

What can White Collar Boxing do for you?

Boxing is one of the workouts that keep your body healthy and fit, elevates wellness and helps you get rid of stress. White Collar Boxing will make you lose fat while keeping your body in shape. Also, you can increase your confidence, courage, and stamina via boxing. Apparently, you’ll experience a whole lot of changes when you start your classes. A look at the success rate and levels of other members will motivate you to up your game.

Whether as a complete beginner or with a sort of experience in the past, our training classes are just for you. After series of stretching and warm up exercises, we hone our focus of making you learn boxing tactics – jabs, uppercuts, hooks, sound punches and giving personal training to each member and make all improve on their unique weaknesses.  With time, the performance and abilities of the members are accessed by letting them punch against punch bags and perform different tactics under close supervision. In addition to other training, all sessions entail proper stamina-building workouts and aerobic exercises to make you stronger, fitter and more confident.